Vanity Fair has split September covers – Michael Jackson and Farrah Fawcett – and the explosive Fawcett article by Leslie Bennetts offers a remarkable, on-the-record example of the father-daughter dynamic between Farrah’s on-off lover Ryan O’Neal and his daughter Tatum (who he calls a bitch), as well as insight into his relationship with Farrah. 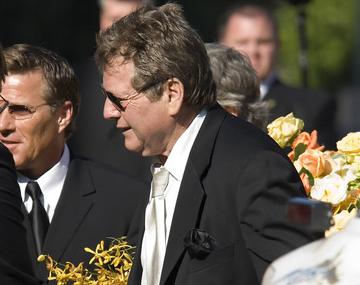 O’Neal spoke to Bennetts and characterized himself as “a hopeless father.” He offered the below example from Farrah’s funeral as a reason why:

“I had just put the casket in the hearse and I was watching it drive away when a beautiful blonde woman comes up and embraces me,” Ryan told me. “I said to her, ‘You have a drink on you? You have a car?’ She said, ‘Daddy, it’s me–Tatum!’ I was just trying to be funny with a strange Swedish woman, and it’s my daughter. It’s so sick.”

“That’s our relationship in a nutshell,” Tatum said when I asked her about it. “You make of it what you will.” She sighed. “It had been a few years since we’d seen each other, and he was always a ladies’ man, a bon vivant.”

Ryan also talks about the demise of his relationship with Farrah in 1998, when the pair initially split. He cites Farrah’s menopause and talks about subsequently bedding a much-younger woman.

The whole article is not online, but the issue is on newsstands Wednesday in New York and LA, and a few more remarkable excerpts are here on Vanity Fair’s website.

The magazine’s press release on the article is below, and he says he regrets some of his children and son Griffin says his father gave him cocaine at age 11:

NEW YORK, N.Y.–Ryan O’Neal speaks extensively with Vanity Fair contributing editor Leslie Bennetts about his relationship with Farrah Fawcett, and his family struggles, both before and after her death, and tells Bennetts he is full of regrets, saying, “I wish I could do it over with [Fawcett]. I would have been much kinder, more understanding, more mature. I’d lose some of the savagery. I don’t know how she got cancer; maybe some of it was me. She wouldn’t even have a diet soda!”

Bennetts reports that one of the reasons for their split, according to O’Neal, was that Fawcett “was going through some kind of change…. I didn’t have a change of life; I was always a jerk. But they’re hard work, these divas; I was sick of it, and I was unappreciated.” He says he felt that Fawcett didn’t like him very much, “so I excused myself, and I was lucky enough to meet this young girl. She was more a daughter to me than a lover, and my own daughter had flown the coop, so here was this replacement.” Despite their split, they eventually managed to come back together when O’Neal was diagnosed with chronic myelogenous leukemia in 2001 (it has since been controlled with the drug Gleevec). “I talked to her every day,” O’Neal says. “We pulled apart, but we never popped loose.”

O’Neal tells Bennetts that six weeks before her death Fawcett asked him, “Am I going to make it?,” and he said, “Sure, baby–and if you don’t, I’ll go with you,” to which Fawcett replied, “Stop the Gleevec.” He didn’t give up his medication, Bennetts writes, but was at Fawcett’s bedside when she passed away.

According to O’Neal, Fawcett’s apparent softness was deceptive, and she “had a stubborn streak of pride and righteousness,” he says. They would fight about “anything and everything,” and they “started fighting about [their son] Redmond by the time he was three,” he tells Bennetts.

O’Neal calls Fawcett “provincial in many ways,” and tells Bennetts that he thinks she may have preferred “a picket-fence kind of life, cooking and doing her art,” rather than the strain of Hollywood. Aging was hard for her, he says. “In my mind, if I say, ‘You’re beautiful,’ that should be enough. But she was very high-maintenance. She took a long time getting ready to go anywhere, and that started to drive me nuts. We were late to see the president of the United States, and she was his dinner partner! So we were an hour late for Ronald Reagan.”

Griffin O’Neal is suspicious of his father’s newfound devotion to Fawcett, telling Bennetts, “All those crocodile tears!… My dad’s only goal was to make sure he would be in the will. It was so disgustingly transparent as soon as he found out she was terminal. I consider him a vulture presiding over a carcass. Ryan thought he was going to get everything.” When asked about Griffin’s charge that Ryan was trying to get Fawcett’s money, the elder O’Neal says, “I hate him! He knows I have money. I made a tremendous amount of money on real estate, more than I deserve.”

O’Neal is brutal on the subject of his parenting and his children, telling Bennetts, “I’m a hopeless father. I don’t know why. I don’t think I was supposed to be a father. Just look around at my work–they’re either in jail or they should be.” He doesn’t talk to any of his kids except for Redmond, whom he visits in jail. “I was in touch with them for years, and I was a mess,” he says of the others. “I’m not in touch with them now, and I’ve never been happier.” When asked if he’s sorry he had children, he nods, Bennetts reports. “A couple of them I would take back,” he says.

O’Neal tells Bennetts that he didn’t recognize his daughter, Tatum, at Fawcett’s funeral. “I had just put the casket in the hearse and was watching it drive away,” he says, “when a beautiful blonde woman comes up and embraces me. I said to her, ‘You have a drink on you? You have a car?’ She said, ‘Daddy, it’s me–Tatum!’ I was just trying to be funny with a strange Swedish woman, and it’s my daughter. It’s so sick.”

When Bennetts asks Tatum about the exchange, she replies, “That’s our relationship in a nutshell…. You make of it what you will.” She sighed. “It had been a few years since we’d seen each other, and he was always a ladies’ man, a bon vivant.”

O’Neal fumes when asked about Tatum’s autobiography, saying “She wrote a book–bitch! How dare she throw our laundry in the street for money!… She didn’t call after Farrah’s show. She’ll have to explain that.”

Tatum tells Bennetts that her father “has every right to be angry about the book; no parent wants to hear their kid saying shitty things about them… But what I wrote in the book was true. I’ve got a battle with drugs, but I’m a strong, independent person, and I fight for myself, and my father and I butt heads. When I was 16 years old, he and Farrah moved in together, and after that I saw my dad periodically, and that took a long time for me to get over. Would I do that to my kids? No, but I don’t think Farrah was responsible for that. I truly thought Farrah was inspirational and beautiful and kind. Anyway, it’s past; I’ve moved on. I’m older now, and I forgive him.”

O’Neal claims Griffin has sold salacious information about the family to the tabloids, a charge that Griffin denies–“Absolutely not! Not one thing!,” Griffin tells Bennetts. “My father is afraid of me because I know the truth,” Griffin says. “That’s the part that absolutely scares him to death.” Griffin suggests that the family’s problems might have something to do with the fact that Ryan plied his children with drugs–“My father gave me cocaine when I was 11 and insisted I take it,” he tells Bennetts–and was prone to uncontrollable rages. “He was violent all the way through my upbringing,” says Griffin. “He was a very abusive, narcissistic psychopath. He gets so mad he can’t control anything he’s doing.”