Call it a New Moon movie mystery for Rob Pattinson, the handsome British actor that plays vampire Edward Cullen in the upcoming big screen attraction. Twilight star Robert Pattinson has said he isn’t sure why so many women fall in love with his character Edward Cullen. 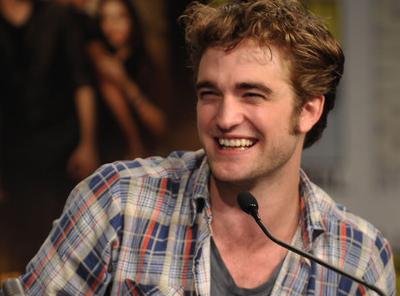 Robert, 23, plays the dreamy vampire in the hit film series and he said he isn’t sure if Edward is as nice as he seems.

His fans are relentless as they eagerly await his every move, even when he is working on other films. While in New York City filming ‘Remember Me’ Pattinson has at times had to dodge fans with clever hiding tactics. It was the same with a recent visit to Comic-Con in Los Angeles where more fans swarmed the man that plays Edward Cullen.

The actor claims he just can’t seem to figure out why he the character has brought so much attention from the opposite sex. He said: “It’s weird, but girls always seem like that.”

The actor added in his assessment, “Being a guy, you always just look at girls and think: ‘Why are you with that guy?’ With virtually anyone, the nice guys always seem to come last. “You always get weirdos like Edward who seem to attract women for some reason.”

Meanwhile, Robert Pattinson has been back in New York for just a matter of days — and he’s already giving the local police force a run for its money!

The British actor — in the Big Apple filming his new movie Remember Me — will have officers from the New York City Police Department taking control of his personal security.

“Enough is enough,” a police source told the Irish Central website. “His security people aren’t up to the task of keeping him safe, and they have no idea how to deal with the crowds this guy attracts.”

The source pointed to a well-publicized incident in which the Twilight star ran from a crowd of admirers and was slightly injured when he was struck by a taxi.

“That’s amateur hour,” the police source said. “We have celebrities a lot bigger than this guy who can come and go in perfect safety because we know how to take the right precautions. We have presidents and kings come and go. This poor kid can’t get in or out of a car without things getting dangerous.”