Salma Hayek, who looked beautiful while strolling through Hollywood this weekend, is one of the 50 women who will be featured in Variety’s Women’s Impact Report. 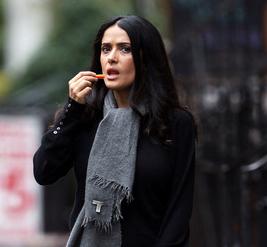 Other Hollywood stars who were movers and shakers in the industry this year include Angelina Jolie, Tina Fey and British author J.K. Rowling.

In the special issue, Salma Hayek speaks about what her company, Ventanazul, saying “I think we are the only company right now whose sole mission is to specialize in two things: 1) appealing to the Latin market and 2) taking a Latin story or a Latin talent and appealing to the global market.”

As for her work as a producer, the actress revealed, “Instead of making one good movie, I’m really thinking of a brand. I want the Latin people to be proud of the projects that come out of it and the rest of the world to be excited to see our next thing.”

And about her dreams, she added, I do dream hard, but I’m very flexible. I think it’s the only way to be a true visionary. … I don’t think I’m going to fail, but if I do, the next person in the line will go a little bit further because I took the chance.”