Salma Hayek claims that her breasts are a present from God. 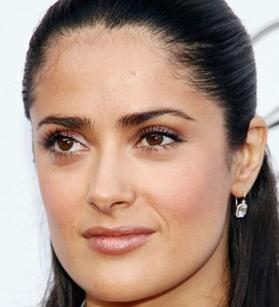 The Mexican actress, who is popular for her curvy figure, used to be flat-chested when she was younger and regularly prayed for a bigger bust.

She even put her hands in holy water to try and make a miracle happen. She revealed, “My mother and I stopped at a church during a road trip we were making from our home in Mexico. When we went inside the church, I prayed for the miracle that I wanted to happen. I put my hands in holy water and said, ‘Please God, give me some breasts!'”

Just months later, Salma Hayek started to develop the breasts which have become the envy of women all over the world.

The actress added to chat show host David Letterman, “He gave me them! Within a few months, I developed a growing spurt, as all teenagers do, and I was very pleased with the way I grew outwards.”

The “Ugly Betty” producer previously revealed she was told she would never make it in Hollywood because her height was a “deformity”.