A women’s shelter on Wednesday cut the comedian Sandra Bernhard from its annual benefit after she joked Republican vice-presidential nominee Sarah Palin would be gang-raped if she ever visited New York. 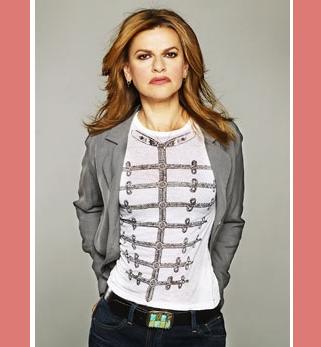 The female headliner made shocking remarks last month during her one-woman show in Washington before Sarah Palin visited New York to campaign. Sandra Bernhard joked that Sarah Palin would be “gang-raped by my big black brothers” during a diatribe in which she also criticized Palin for opposing abortion rights.

Many guests at Rosie’s Place, a Boston shelter, have been victims of violence, according to the public relations director Leemarie Mosca.

The public relations director explained: “In light of our mission, we don’t think violence against women is a laughing matter.”

Leemarie Mosca revealed that the shelter expected to book a replacement before the Oct. 16 luncheon “Funny Women … Serious Business,” saying: “Right now, our main focus is our event and making sure the event is a success. And for us, that means not including Sandra Bernhard at this time.”

A representative for Bernhard had no immediate comment on the cancellation.

In a statement on her Web site, Sandra Bernhard explained that the gang-rape comment was part of a larger piece from her show about “racism, freedom, women’s rights, and the extreme views of Gov. Sarah Palin — a woman who doesn’t believe that other women should have the right to choose.”

The comedian added: “I certainly wish Gov. Palin no harm — I’d just like her to explain to me how she can hold such outrageous views … and then go back to Alaska.”