Sarah Palin had no problem watching Tina Fey’s impression of her on Saturday Night Live over the weekend — but couldn’t bear to listen what Tina said! 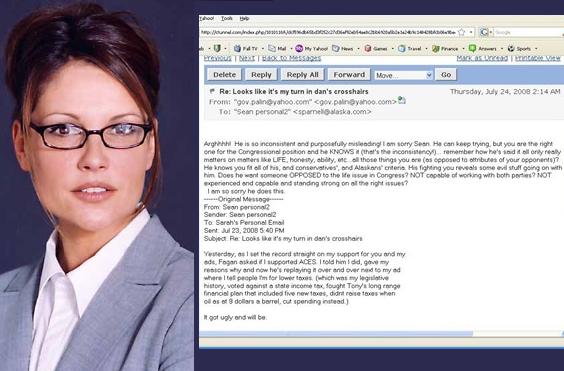 The vice presidential hopeful added: “I didn’t hear a word she said, but the visual was spot on,” Sarah says. “It was hilarious. In fact, I dressed up as Tina Fey once for Halloween. So we’ve been doing that before Tina Fey has been doing that!”

Meanwhile, another report revealed that Sarah Palin’s Yahoo! account was hacked anonymously and the screen shots posted online which issued a press release claiming the anti-Scientology activists Anonymous were behind it. However, that faction of Anonymous denied the hacking claims, saying: “We know it’s not those of us against Scientology. Radar suggested we do that in a recent column. Which is precisely why we wouldn’t. NYPA (not your personal army).”

Perhaps Anonymous was the center of hacking suspicion since it was reportedly famous for attacking the Scientology website recently.

As for Palin email screenshots, e-mail messages and images from the e-mail account [email protected], the e-mails show that Sarah Palin is often mixing governmental and private affairs. The data has been published by WikiLeaks.Wikileaks indicated:

The internet activist group ‘anonymous’, famed for its exposure of unethical behavior by the Scientology cult, has now gone after the Alaskan governor and republican Vice-Presidential candidate Sarah Palin.At around midnight last night the group gained access to governor Palin’s email account … and handed over the contents to the government sunshine site Wikileaks.org.
Governor Palin has come under media criticism in the past week for using pseudo-private email accounts to avoid Alaskan freedom of information laws.

The information includes five screenshots from Palin’s account, including the text of an e-mail exchange with Alaskan Lieutenant Governor Sean Parnell about his campaign for Congress.

Wikileaks site contains screen shots of Palin’s inbox, two example emails, governor Palin’s address box and a couple of family photos. While the emails released so far reveal little, the list of correspondence appears to re-enforce the criticism that Palin is mixing governmental and personal affairs.