Hours after confirming her engagement to Ryan Reynolds, Scarlett Johansson flashed a diamond ring at the Metropolitan Museum of Art’s Costume Institute Gala. 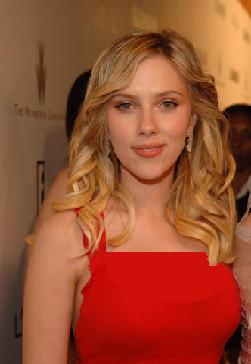 The 23-year-old actress unveiled the sparkler while walking the red carpet at Monday night’s celeb-studded event, which drew the likes of Julia Roberts, George Clooney, Tom Cruise and Katie Holmes.

Scarlett Johansson, flanked by Domenico Dolce and Stefano Gabbana, posed for the cameras in a cream gown by the designers that showed off her curves. Her publicist, Marcel Pariseau, said earlier in the day that Johansson and Reynolds were engaged and had not yet set a wedding date.

The couple reportedly had been dating for more than a year. Their relationship status was speculated about in gossip columns and tabloids, which published paparazzi shots of the pair. When rumors began swirling in early ’08 that Reynolds had proposed, Johansson deflected a question by The Associated Press with a joke about her affection for presidential hopeful Barack Obama, ”My heart belongs to Barack, and that is who I am currently, finally, engaged to. Yes.”

Scarlett Johansson’s recent credits include ”The Other Boleyn Girl” and ”The Nanny Diaries.” Reynolds recently starred in ”Definitely, Maybe.” He was previously engaged to Alanis Morissette.