Scarlett Johansson was spotted at her new popcorn shop in Paris on Saturday. 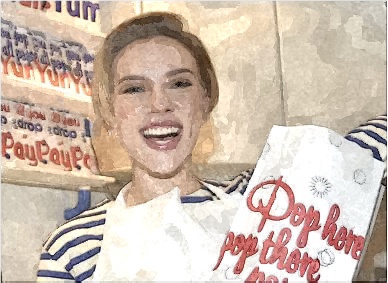 “The Avengers” star was wearing a classic French blue and white striped top and provided popcorns to customers at the launch of the Yummy Pop store. Scarlett and husband Romain Dauriac have opened in the city’s Marais district. They hope that their crunchy snack will impress the customers with favorite truffle, parmesan, and sage flavors. Aside from the successful Saturday’s soft launch, there will be an official grand opening in the future date. Meanwhile, Scarlett was passionate about popcorn. Her spokesman revealed that the crunchy snack was cooked and it was mixed fresh on the spot with seasonal ingredients.