Scarlett Johansson, who is a four-time Golden Globe-nominated actress, becomes the cover girl of Nylon magazine for its June-July 2008 issue. 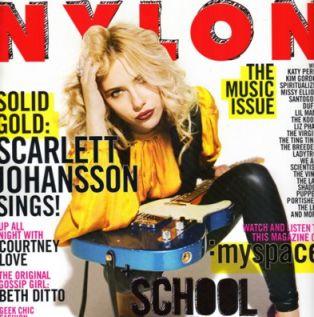 The Nylon magazine indicated that she records an album in February. The actress revealed, “I’ve had people come up to me and say, ‘ I’ve never seen any of your movies. I actually don’t watch movies. What have you been in again?’ ”

The actress expresses her attempt to avoid making a pop album, saying, “I guess this was the equivalent of making an independent film as opposed to a huge studio production. And I think that it was important that it had a certain kind of attention and that it didn’t get lost in a huge mix of things.”

The twenty-three year old screen actress added, “I don’t understand it. I know a lot of writers who take pictures, or makeup artists who paint, or sculptors who make jewelry, all kinds of stuff – so what’s so surprising about an actor who sings?”

Scarlett Johansson recently announced her engagement to actor Ryan Reynolds, will release her debut album, “Anywhere I Lay My Head”, on Tuesday.