Scarlett Johansson, who graced the cover of Allure magazine, revealed she’s totally baffled over why Lindsay Lohan scrawled vulgar words about the “Lost in Translation” beauty on a Big Apple bathroom stall 2½ years ago. 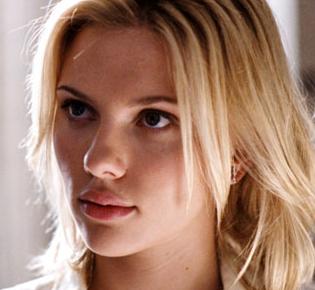 The actress revealed of the incident: “That’s what I heard. I don’t know what the motivation was behind that. I remember it was something really vulgar — I mean, shockingly so, like, ‘Whoa, what, who are you?'”

The magazine includes a picture of Scarlett Johansson and Lindsay Lohan at an MTV party in 2004, and the newly married actress said it’s one of the few meetings she’s ever had with Lindsay Lohan.

The “Vicky Cristina Barcelona” star also revealed: “I don’t really know that person [Lohan]. I only met her, like, three times.”

Scarlett Johansson, who turned 24 on Saturday, doesn’t like the term “muse” to describe her professional relationship with veteran moviemaker Woody Allen.

She explained: “I don’t inspire the work that Woody does. I’m just lucky to fit into the ‘young woman’ category in his movies. But make no mistake, I know that if it wasn’t me, it would be somebody else.”

On the information that Katy Perry penned the tune “I Kissed a Girl” after the actress, Scarlett said: “I had no idea [about the song] — I should get a cut! That’s flattering, but my lips are kind of taken.”

When asked how she met husband Ryan Reynolds (whom she began dating last year), she replied: “Nobody knows. It’s private. It’s our story.”

Scarlett Johansson also zipped her lips about a tattoo on her forearm, adding: “It’s kind of personal. It’s a sunrise, and it makes me happy when I look at it.”