Scarlett Johansson’s love for Brit pubs made her pile on so much weight during the filming of her new film “The Other Boleyn Girl” that the film’s bosses had to re-shoot a few scenes. 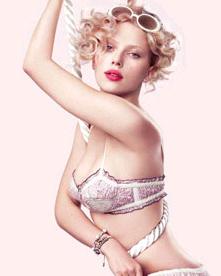 A source revealed that the actress kept gaining weight and they struggled to contain her curves.

The source revealed, “There was some re-shooting. The problem was that Scarlett piled on weight during filming and there was concern that she looked thin in some scenes and heavier in other.”

The source added, “Scarlett looks sensational in the movie, but the problem has been that her weight has gone up and down like a yo-yo because she likes her food. She’s a fan of British pubs and she really tucks in so it was a case of tightening the corset stays.”