Is Vanessa Hudgens heads for more controversy with a new batch of photos that are again making their way around the Internet? 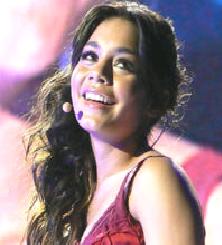 Perhaps the latest controversy will involve the fairly innocent pictures of Vanessa and some girlfriends playing around and they have been labeled as lesbian kissing photos.

But combined with her earlier releases and the belief by many that there are even more photos set to be released it puts Vanessa in a very uncomfortable position. Unless she is the one that leaked the photos she likely needs to figure out who has them and when the next volley is coming.
She had the perfect place scheduled to come clean. She was all set to go on the “Tonight Show” but for some reason she backed out. She said she had scheduling issues but she was in Los Angles as she was spotted dressed in sweats leaving a church in Los Angeles on Thursday. She made her church confession, which is good, but skipping Leno was a missed confession that could have helped her greatly.

Her decision is a bit puzzling as Jay would have put on the kid gloves for the eighteen year old and allowed her confession to be heard by a nationwide audience (and what a record audience that could have been) and she could have easily deflected the growing scandal with a bit of humor.