Selena Gomez shines in a bright yellow dress on the April 2009 cover of Latina magazine. 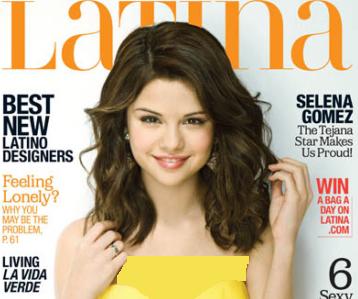 The 16-year-old “Wizards” star dished to the mag about the “feud” with Miley Cyrus, her Latin roots and looking up to Britney Spears.

On being a teen celebrity, including the perks and the pitfalls that come with it: “I always wanted this to be my life but I don’t want it to live my life for me.”

On admiring Britney Spears: “In a way, Britney can be someone to look up to. She was constantly being looked at and picked on, and it’s starting to happen to me. At the moment, I don’t have anything good they can pick on me with, but they’ll find something. Maybe I can be as strong.”

On being proud of her heritage: “I didn’t even realize what a big deal it was to be Latin at first. But then one day being with my dad, it hit me: it’s pretty neat to be Mexican. And there aren’t enough Latinas in Hollywood-or there are, but they don’t get the recognition. So to be able to come out here and use that, it’s really a powerful thing.”

On the so-called feud with fellow Disney star, Miley Cyrus: “I think Miley can agree with me. There are so many more things going on that are so much more important to us in our lives than wasting time on that stuff.”

Also of note, Selena and co-star David Henrie went on a date to San Juan restaurant, which is known to locals as a “dating hotspot.” The pair say they are just friends.