Zac Efron jokes with Aussie Rove host Rove McManus as they figure out he can perform miracles. 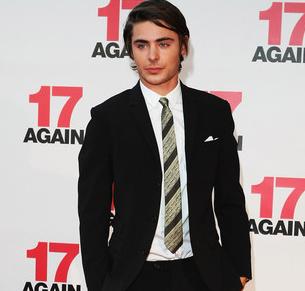 The 21-year-old heartthrob talked about his movie, 17 Again, Australian lingo and his performance at the Oscars. Check it:

On his older fans: “There are a lot of young fans — they’re beautiful and they’re amazing — but it’s the moms that get absolutely crazy. There was one, I was at this signing and there were stairs you had to walk up and everyone was coming one at a time. There was this mom that was in a wheelchair and her daughter came up and got an autograph. And the mom was like, ‘I want one too,’ so she stands right up from the wheelchair and walks right up on stage. I was like, ‘Of course, you can have whatever you want.’ I signed like ten things for her and she walked back down, sat back in her wheelchair and rolled away.”

On the Australian lingo: “I’m still rusty. I was giving an interview the other day and the lady was so nice, she was a sweetheart. We were laughing a lot and I said at the end of the interview, ‘I’m really rooting for you.” She went silent. ‘Hello, you still there?’ She started giggling pretty hard. I realized that that was a bad mistake. A couple days later [someone explained what ‘root’ meant to me].”

On performing with Hugh Jackman at the Oscars: “It was, but there’s a a safety net. No one’s gonna start hackling you because Wolverine can literally just (makes gesture of strangling). It was fantastic, It was an honor to be up there with those guys. 100% [I get nervous]. I think the Oscars was the most nervous I’ve ever been in my entire life.”