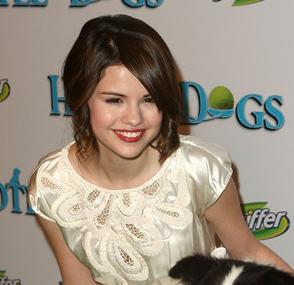 The 16-year-old celebrated her win while having dinner with her cast, and recorded her reactions to share them with her fans.

Selena won the award for her role in Wizards of Waverly against competition from Miranda Cosgrove (iCarly), Miley Cyrus (Hannah Montana) and America Ferrera (Ugly Betty).

Wizards of Waverly focuses on the three children – Alex (Selena), Justin and Max – of Italian-American Jerry Russo and his eccentric Mexican-American wife Theresa.

The children come through as normal teens, but are actually wizards in training.

Delighted at her first Kids’ Choice Awards win, the sixteen-year-old wrote in a YouTube post addressed to her fans.