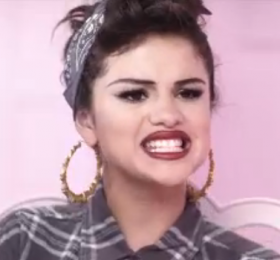 The Disney star was wearing heavy makeup and an open flannel shirt that exposes her bra while rapping, “Who else better than me to be hosting the show/ People know who the eff I is/ I’m a pro/ The right time and place for me to be/ Yeah, I’ll say it/ Congratulations to me!” A disclaimer was included in the video that some of the Selenas in the video are fictional and any similarities to the actual Selena are purely coincidental.