Selena Gomez, 16, and the cast of Wizards of Waverly Place, in New York City to promote season 2 of the Disney Channel program, visited the World of Disney in NYC on Saturday, September 6. 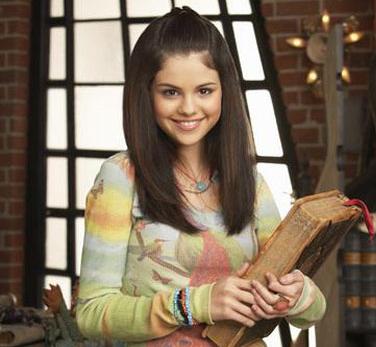 The actress, who previously denied that her new song is about Nick Jonas, looked chic dressed in a pinstripe front zip mini skirt cinched with a sash at the waist and a white three quarter sleeve top with a scoop neckline.

The Disney star accessorized with black patent pumps and a silver bangle bracelet on her right arm. Her incredibly dark glossy layered cut hair framed her face, accentuating her smoky eye make up and the pink lip gloss.

The story includes the plot where the children passes the stages of being normal teens, but they are actually wizards in training. Alex’s proclivity to use magic unsupervised often gets her into trouble, teaching her lessons and morals relating to friends, family, and school.

The show, described as “a cross between Harry Potter and George Lopez,” is filmed in front of a live audience.