Shirley MacLaine was reported to star as Coco Chanel tonight on Lifetime! Miniseries at 8pm. 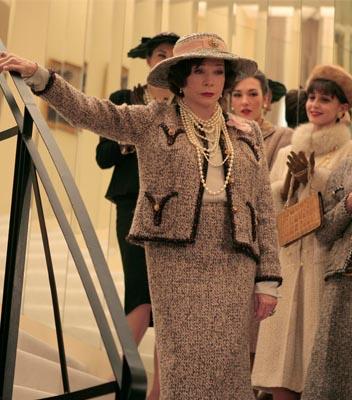 If Shirley MacLaine shared a conversation with Audrey Hepburn about playing Coco Chanel? The actress responded: “When we were making the movie “The Children’s Hour,” she and I talked a lot about fashion designers because I didn’t know much about fashion. She told me that I should play Coco Chanel. I disagreed because Chanel was little and scrunched-over and very short. And she said, “No, the spirit of the woman matches your spirit.” I found Coco to be everything between generous and rude. I didn’t know what Audrey meant [about matching spirits]. But it turns out she was right.”

On how did she compare Coco Chanel’s style and her clothes to her own style, she answered: “Do you mean the suits and hats and the pearls, et cetera? I couldn’t wear that stuff during the day. I don’t have that kind of lifestyle, but her clothes were meant more to express her personality. Remember, she was an orphan. She was poverty-stricken. She was always afraid that it would happen to her again, and her need to stay a woman in charge is what was behind these clothes.”

Did she ever wear Coco Chanel clothes? The actress replied: “I was wearing her clothes, all knockoffs I might add, in my twenties and thirties because they really worked then. Not so much now. Now my personal taste runs more to plain, simple lines.”

If she ever meet Coco Chanel? The actress explained: “Someone looked on the Internet and found a picture of me at a Chanel collection. I was in my twenties or thirties, but I don’t remember having been there. I could have met her. It seems to me, if I had met her, I would have remembered it.”

On her personality that drew her to the role she portrayed, she added: “Her contradictions. Her colorful rudeness. Her sense that everything was about her talent and her goodness. She could improvise a new outfit in 10 seconds. I loved that. And I loved her conflict between love and ambition, as well as her conflict between how to get things done and not being hurtful.”

About the movie, “Coco Chanel” is the rags-to-riches tale charting the rise of one of the most influential fashion icons of the 20th century. From her humble childhood in a French orphanage, through her early days as a young dressmaker’s assistant, to her passionate and tragic love with a dashing Englishman, and ultimately to her success as a pioneering icon, “Coco Chanel” is the story of a glamorous woman who was hard to love and harder to ignore. This epic true story stars Shirley MacLaine, Malcolm McDowell and Barbora Bobulova.