An ex-model found stuffed in a bloodstained suitcase without fingers or teeth was so badly mutilated that authorities had to use breast implants to identify her body, prosecutors said Friday. 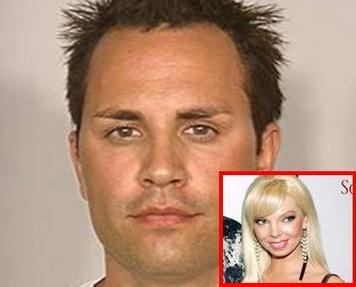 Meanwhile, the U.S. Marshals Service offered a $25,000 reward for information leading to the arrest of Ryan Alexander Jenkins, a wealthy reality TV show contestant who was charged Thursday with murder in the gruesome slaying of Jasmine Fiore.

Detectives tracked the serial number on the implants because they could not use fingerprints or dental records, said Farrah Emami, a spokeswoman for the Orange County district attorney’s office.

Fiore’s body was found Aug. 15 in a trash bin in Buena Park, an Orange County city about 20 miles southeast of Los Angeles.

Authorities believe Jenkins, a contestant on VH1’s “Megan Wants a Millionaire,” may have fled more than 1,000 miles to reach his native Canada.

Buena Park police Lt. Steve Holliday said Jenkins, a native of Calgary, Alberta, is possibly armed with a handgun. Prosecutors recommended bail of $10 million upon his arrest and said he had significant resources to finance his flight.

Prosecutors revealed the U.S. Coast Guard briefly pursued a boat Wednesday off the northwest coast of Washington state that was registered to Jenkins, but it eluded them. The Coast Guard was unable to verify that Jenkins was aboard but believe he was, Emami said.

Authorities in Whatcom County, Wash., have said they received a report that a man matching Jenkins’ description arrived by boat Wednesday at Point Roberts, U.S. territory about 10 miles away at the tip of a peninsula reachable by land only from Canada. Authorities believe Jenkins walked across the border to British Columbia.
Story continues below

Jenkins’ car and an empty boat trailer were found at a marina in the northwest Washington town of Blaine, just across the bay from Point Roberts.

He declined to elaborate.

Jenkins is a real estate developer and investor who is also the son of a prominent Canadian architect. On the reality show, he said he had between $1 million and $2.5 million, Hession said, adding the money could help Jenkins stay ahead of police or work against him.

“It could be an area where he may not have access to that wealth, where he has assets that he has to sell or something like that and then he’s going to have to expose himself to potential arrest,” Hession said.

Hession declined to say if authorities were watching Jenkins’ assets as part of their investigation.

“When we’re looking for someone who’s a fugitive, we try to find out everything we can about that person,” he said. “We’re going to turn every rock over.”

Fiore and Jenkins were briefly married in a quickie Las Vegas wedding in March and had been fighting in recent months. Prosecutors said the two checked into a San Diego hotel Aug. 13, and Jenkins checked out the next morning. Fiore was not seen alive again.

Fiore’s mother, Lisa Lepore, told The Associated Press her daughter had the marriage annulled in May. However, there were no court records of an annulment in either Clark County, Nev., where the couple was married, or in Los Angeles County, where they most recently lived.

Court records show Jenkins was charged in June in Clark County, Nev., with a misdemeanor count of “battery constituting domestic violence” for allegedly hitting Fiore in the arm and was set to be tried in December.

Neal Tomlinson, a partner at the law firm representing Jenkins in that case, declined to comment.

In his hometown of Calgary, Jenkins was sentenced to 15 months probation in January 2007 on an unspecified assault charge.

Alain Hepner, Jenkins’ attorney in that matter, said as part of the judgment the judge also ordered counseling for anger management, domestic violence and sexual addiction. Hepner said there was also a civil restraining order.

In Calgary, Paulina Chmielecka said she was engaged to Jenkins for 2 1/2 years and never saw a violent side.

“The guy was a great guy, as far as I knew he was very happy,” she told the Canadian TV network CTV. “In our relationship, we had our fights – everyone does – but I would never say, ‘Well, he could have murdered someone.’ There’s no way.”

A resume posted on the professional networking site LinkedIn.com says Jenkins has a license to fly commercial airplanes and has dabbled in several development enterprises and investments since graduating from college in 1999. Those include Townscape Development Inc., a condo project undertaken in Calgary with his father, architect Daniel Jenkins.

The elder Jenkins did not return phone or e-mail messages at his office.

After taping for “Megan Wants a Millionaire” finished in early March, Jenkins met Fiore in a Las Vegas casino and the two got married, said Lepore, Fiore’s mother. Court records show the date of marriage as March 18.

But in May “they had a big blowout” and fought because he was jealous of her ex-boyfriends, Lepore said.

Jenkins then went to Mexico to do another reality TV show but struggled to get Fiore back when he returned.

“He convinced her during that month that he was really the guy for her,” Lepore said. “He wrote poems and stories, and prayed, and (claimed he) had this huge spiritual awakening.”

The U.S. has filed a provisional apprehension warrant with Canada that allows officials there to issue a Canadian arrest warrant based on the U.S. charges, said Hession, the U.S. marshals official. The Canadian government will extradite defendants to the U.S. but only with reassurances that they will not face the death penalty in the U.S.

Emami, the Orange County district attorney spokeswoman, has said her office is not pursuing the death penalty.