Colombia’s Sofia Vergara is the latest sexy South American senorita to get Hollywood sizzling cover for its July issue. 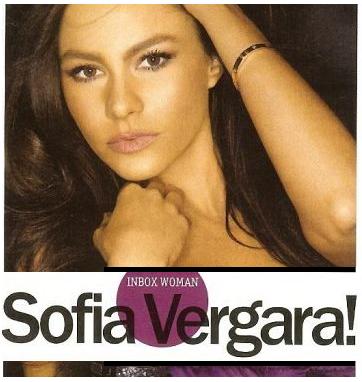 Being the former girlfriend of Scientology hobbist Tom Cruise is not the most credible paid off for Sofia Vergara . After booting the movie midget into touch, the Colombian model’s career has rocketed with sexy roles in “Entourage” and “Dirty Sexy Money”. She has upcoming new comedy film, “Meet The Brixens” at US cinemas. You could see her Maxim picture here.

Here is some of her “Maxim” interview:

People are calling you the Latin Pamela Anderson. What do you make of that?

“It is horrible! I don’t even know her. And everything I have is real!”

Oh, so that’s what they’re comparing is it?

Is it true you are blonde in real life?

“I am actually very blonde. In Hollywood they don’t understand at a dark-skinned woman with an accent like mine could be a blonde. My son says I’m only woman in Hollywood with blonde roots.”

Do your son’s mates come over and gawp at you?

“No, they refused to me… My son tells me I’m scary. When I call him, his caller ID says, “Der Fuhrer.”

You design your own undies back home – but surely not every senorita can look as sexy as you them?

So you weren’t nervous doing this shoot?

“I felt a little weird because I haven’t really done any sexy stuff in a few years. But at the shoot I realized, “Sh*t! I’m 35 years old, and I’m still in a G-string!’ I guess I still have it.”