New details have emerged about the midnight altercation between Chris Brown and Rihanna that led to Brown being booked on a felony criminal threat charge on Sunday. 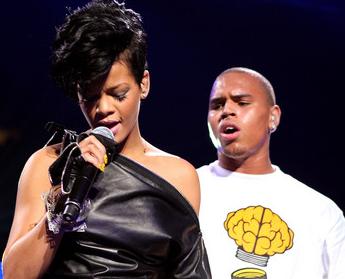 A source close to the couple revealed: “Chris knocked her around. Black eye, blood, bruises. She had to be treated by a doctor.”

A police source confirmed that the singer suffered a black eye as well as “a swollen split lip and two red and purple contusions on either side of her forehead.”

The source, who described police photos of Rihanna, added: “She looked distraught and in a lot of pain. Her eyes were closed because she was looking down.”

The Barbados-bred beauty, 20, who is currently in “a safe place,” says a friend, is cooperating with detectives, according to the Los Angeles Times. Los Angeles Police Chief William Bratton has said he expects the case will be handed over to the district attorney’s office on Tuesday or Wednesday. At that time, the prosecutors could charge Brown, 19, with more crimes.

The case could be affected by how much Rihanna is willing to forgive her boyfriend.

Steve Sitkoff, who is an L.A. defense attorney, revealed: “Prosecutors back off somewhat when they see a couple trying to work out their own issues.”

But, says the friend, “I would be so sad if she went back to him.”

In the meantime, both stars have canceled upcoming appearances: The NBA has issued a statement that Brown will no longer participate in their All-Star Game events in Phoenix this weekend, while Rihanna backed out of a Friday night concert in Malaysia.