Country singer Taylor Swift strums on her guitar in this new shot from TIME as she answered their 10 questions. 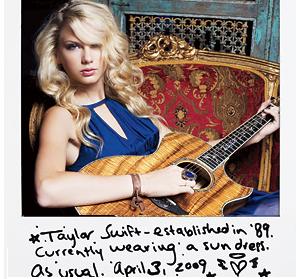 The 19-year-old “Fearless” female recently chatted with the magazine and opened up about songwriting, musical influences and Taylor Hanson, all sent in by fans.

On her biggest musical influence: “Shania Twain. She came out, and she was just so strong and so independent and wrote all her own songs. That meant so much to me, even as a 10-year-old. Just knowing that the stories she was telling in those songs–those were her stories.”

On her songwriting process: “Most of the time, songs that I write end up being finished in 30 minutes or less. ‘Love Story’ I wrote on my bedroom floor in about 20 minutes. When I get on a roll with something, it’s really hard for me to put it down unfinished. I have ways of channeling the heartbreak. Also, it’s been a really awesome year. I get so excited when a song I wrote that’s very personal to me goes No. 1 and I look down and see people singing the words back to me. That makes me so much happier than anything could ever bring me down.”

On the story behind “Love Story”: “‘Love Story’ is actually about a guy that I almost dated. But when I introduced him to my family and my friends, they all said they didn’t like him. All of them! For the first time, I could relate to that Romeo-and-Juliet situation where the only people who wanted them to be together were them. That’s the most romantic song I’ve written, and it’s not even about a person I really dated.”

On how she manage to appear so genuinely happy when, according to her songs, she has suffered so much heartbreak: “I have ways of channeling the heartbreak. Also, it’s been a really awesome year. I get so excited when a song I wrote that’s very personal to me goes No. 1 and I look down and see people singing the words back to me. That makes me so much happier than anything could ever bring me down.”

On sort of music do she listens to: “I’ve always loved Def Leppard, ever since I was little. I got to do a TV concert called CMT Crossroads with them, where they pair up a country artist with legends in rock ‘n’ roll. I was singing Def Leppard songs, and they were singing my songs. It was just a complete out-of-body experience.”

Her advice do you have for aspiring songwriters: “Write your songs not for a demographic or for getting on the radio. Write your songs for the person you’re writing that song about. When I sit down, I say to myself, “O.K., who is this about? What would I say to him right now if I could?””

On her many unrecorded covers floating around on YouTube. If she’ll ever make an album of just covers: “I don’t think I’d ever make an album of just covers because I love writing my own music. In concert, I love doing pop covers like Beyoncé or Rihanna–things that people wouldn’t expect. But I usually try to cycle them through every couple of months, because if I didn’t write it, it’s easier for me to get tired singing it live.”

If she thinks she has influenced the younger generation to appreciate country more: “So many girls come up and say to me, “I have never listened to country music in my life. I didn’t even know my town had a country-music station. Then I got your record, and now I’m obsessed.” That’s the coolest compliment to me.”

On collaborating with another recording artist: “I would like to do a duet with Taylor Hanson, because I have loved Hanson since I was 8. And Taylor Hanson has an amazing voice. And also we’re both named Taylor.”

If she thinks it’s right for people to pay so much attention to the personal lives of entertainers “I feel like people paying attention to your personal life when you’re in this position is sort of a given. There’s nothing that I can say to make it stop. I don’t live in L.A. I live in Nashville. The paparazzi do not know where Nashville is, so I sort of have a normal life when I’m home.”