Taylor Swift is trying to get over her split from Joe Jonas by listening to sad songs and talking to her cat. 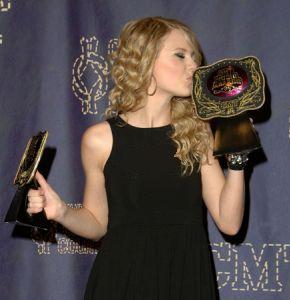 The 18-year-old singer was reportedly dumped by Joe Jonas in a phone call earlier this month after a five-month romance.

It was reported that Taylor Swift appeared to find it difficult to return to single life. On her online blog, she wrote: “I just got back from a 5 show run on the road. Now I’m sitting in my kitchen..on the counter. Eating cool whip.”

She also wrote: “And trying to think of things to do with my free time. Other than talking to my cat and making playlists of sad songs. Sad songs are awesome, by the way.”

Meanwhile, she also mentioned about American Music Award, saying: “I’m so excited, you got me nominated for an American Music Award this year!! I’m nominated in the “Favorite Female Country” category. Thank you so much for making that happen for me again this year!! It’ll be so cool to go to the AMA’s again. I’m performing, and I have so many ideas that we’re working out for the performance. And hey, I’ve never won an AMA before…….. Maybe this year? It’s completely up to you, because it’s fan-voted. (yesssss) I think you have to login and stuff to vote, but it would make me soo happy if you did. :)”