Taylor Swift, who previously top the charts with her album entitled “Fearless,” is returning the favor and giving a special shout-out to fans after being voted Favorite Country Female at this year’s American Music Awards. 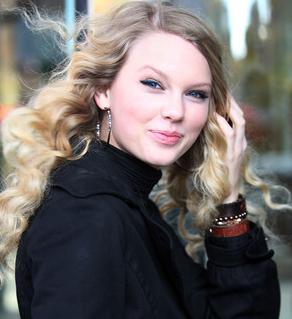 The 18-year-old country singer, who experienced a highly-publicized split with Joe Jonas, wrote on her MySpace blog: “I’m thankful that, even when it’s raining, I’ve got people to count on.”

The country singer also wrote: “All the signings and meet and greets and concerts and faces were running through my head as I ran up the stairs to go accept an award you [fans] won for me. I’ve always wanted an American Music Award, and I feel like the luckiest girl in the world to have you out there doing these things for me.”

But the country cutie is also happy to have some time out of the spotlight and spend the holidays with her family as she added: “I’m also thankful for my mom’s incredible, quirky, obnoxiously loud side of the family. They’re all women, and they all gather together at Thanksgiving and join forces to create the loudest possible holiday ever.”