Zac Efron was the name most often mention when teens were asked “who is the hottest male movie star of the summer.” 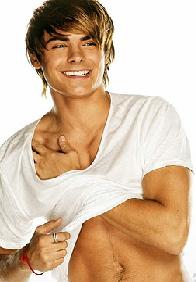 The High School Musical star, who also got a summer’s theatrical “Harispray,” was followed by Johnny Depp, Orlando Bloom, Shia LaBeouf of Transformers and Daniel Radcliffe in a new survey.

The result of hottest male movie star of the summer: