Troops from Prince Harry’s army regiment will be deployed to Afghanistan in October, the defense minister said Thursday, without confirming whether the 22-year-old prince will be among them. 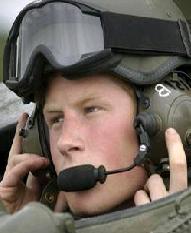 Prince Harry had hoped to be sent to Iraq with his tank unit, but military chiefs ruled in May that the publicity surrounding his deployment could put his unit at risk. Prince Harry said he was disappointed, but was determined to continue his army career.

The army’s chief of staff, Gen. Sir Richard Dannatt, said the military would not comment further about Harry’s movements.

When Prince Harry’s deployment to Iraq was aborted, media outlets reported on how Iraqi insurgents were posting threats on the Internet on how they planned to kill or kidnap the prince.

One report cited an unnamed militia leader saying he planned to send him back to his grandmother ”without his ears.”

British soldiers have been fighting an increasingly difficult battle in Afghanistan.
Troops have suffered increased losses in the troubled Helmand province, where the Taliban have regrouped. Defense Minister Des Browne said troop levels in the country would increase by 100 to 7,800.