Jackson Rathbone becomes a dad for the second time when he welcomes a baby girl with wife, Sheila. 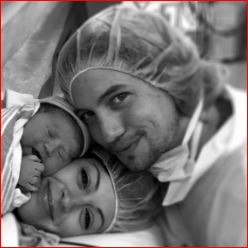 The Twilight star shares the delightful news with a picture that shows his wife and newborn daughter on Twitter. In the photo, the new mother and father are wearing hospital scrubs while holding the cute baby. The new baby is called Presley Bowie Rathbone, which weighs 8lbs 2oz and enters the world at 8:38am. Meanwhile, Jackson is preoccupied with five movies set up this year since Twilight’s film in November 2012.