Val Kilmer, the star of the movie “Deja Vu”, was allegedly identified as a ”pompous jerk” by passengers on a recent flight. 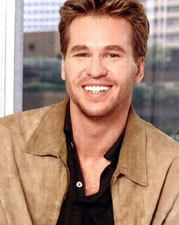 The 47-year-old American actor is reported to have disgusted other passengers with his rudeness on an American Eagle flight from New York to Washington D.C. recently.

A source revealed, “He refused to speak or make eye contact with anyone.” A source added, “At one point, the flight attendant asked if he’d like anything to drink and Val ignored the guy, leaving his male assistant to answer for him. He was such a rude, pompous jerk.”
Val Kilmer recently said that he would love to act in comedy films. He revealed, “I want Owen Wilson’s life. I’d do nothing but comedies for the next five years if I could.”