There are another rounds of Zanessa rumors. Reports claim that Zac Efron’s pretty boy antics may be getting the best of Vanessa Hudgens. Many still believe that the whole love affair is just an act, but it certainly seems like a real relationship and withy that comes these kinds of problems. 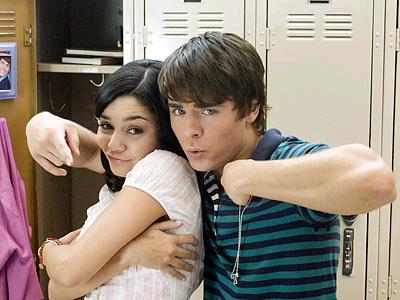 According to a report, even though millions of teenage fans rave over Zac Efron’s pretty-boy good looks, but Vanessa Hudgens is not so thrilled. Now, his High School Musical sweetie is beginning to worry about Zac’s unmanly obsession with his complexion and weight.

A source revealed that Vanessa Hudgens is telling Zac Efron to suck it up and get a bit more rugged instead of such a diva, saying, “She wants to date a man, not a little girl. Vanessa told him to stop being such a sissy and freaking out when he get blemishes. Sometimes, when he goes out, Zac even wears makeup to cover up his imperfections!”

The 20-year old actor does wear a lot of make up, according to the source. The source added, “Zac can be incredibly vain, obsessing about his weight.”

In fairness to Zac, he doesn’t always act like a complete girl since he plays basketball and hits the gym regularly to stay slim, and the source also revealed that he likes to skateboard, too, adding, “He also dresses casually, in T-shirts and jeans – it’s just that they’re designer.”