Duchess Kate is reportedly about to give birth this month after having started her maternity leave at the end of March. 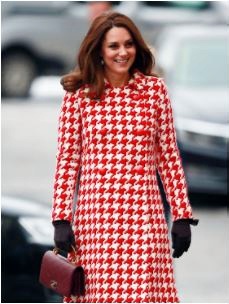 The Duchess of Cambridge is expecting her third baby with husband Prince William. Although there was no official due date revealed to the public, the third royal baby might be welcomed in late April. If the guess is right, the third child’s birthday will happen on their seventh wedding anniversary, which is April 29. The anticipating birth is also possible to happen on St. George’s Day, which is April 23. What is the one thing that possibly suggests that the royal baby is almost here? It is reported that there are parking restrictions outside of the private Lindo Wing, where Duchess Kate delivered Prince George and Princess Charlotte. The restrictions were put up on April 9. Those permits expire on April 30 but it is also possible that these can be extended. Meanwhile, Duchess Kate attended her last official royal outing on March 22, during a visit to the Olympic Park. She was seen just over a week later on Easter alongside Prince William and Queen Elizabeth II.