Zac Efron reportedly caught some heat from Vanessa Hudgens about his obsession with his looks that includes a ton of make-up. 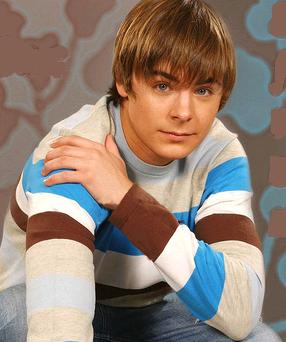 The star of High School Musical has sparked a lot of speculation with his sudden obsession with cosmetics for his kisser and girly ‘do hair! Even after rumbles in the press questioning why he’s wearing full makeup everywhere and Vanessa Hudgens moaning to friends that he’s gotta “man up” and drop the whole metro sexual act.”

It was reported that Zac Efron was snapped sporting a perky top-of-the-head ponytail a la Pebbles in “The Flintstones.” A source revealed, “Zac shocked producers at a wardrobe fitting for his new film, “Seventeen”, when he showed up looking like a runway model in full war paint!”

The source added that the young actor was “wearing man-cake and guy-liner, “and the executives were stunned. Witnesses described the teen idol as maxed-out in black eyeliner, mascara, cover-up, blush and eye shadow.