The boy who seemingly has it all, Zac Efron is now chasing a meatier role that will allow him to wave a weapon. 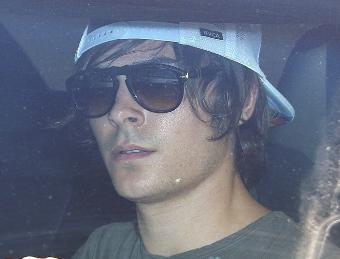 The “High School Musical” actor has notched up enough teen comedies and musicals.

Zac told GQ magazine “A guy I worked with recently told me, ‘You have to earn the right to hold a gun.’

“And that completely made sense. Can you imagine me running around with a gun in a film?

“I noticed the second I started that the things you want to be involved with are always just out of reach.”

He added: “Most parts you’d want people won’t really consider you for because you have to earn that respect.”

Meanwhile, Zac Efron keeps it cool as he backs out of a studio parking lot in Los Angeles on Wednesday afternoon (April 22).

The 21-year-old actor and his 17 Again co-star Matthew Perry played 20 questions with each other on Max 60 Seconds. When Matt asked if he preferred Chuck or Sloth from his fave movie The Goonies, Zac replied, “Hey You Guys…” Guess he couldn’t decide!

Hollywood TV tweeted earlier tonight, “Zac Efron just walked into Vanessa [Hudgens]’s house… Wonder what those lovebirds are up to behind closed doors?”