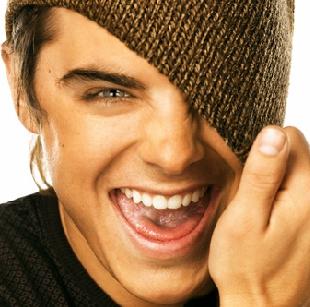 The talk show host even pulled out a clippers and asked the young actor if he would like to get a brand-new, short haircut.

Zac Efron joked that he modeled his hair after hers, saying: “I actually modeled it [after] Ellen season 2.” Ellen DeGeneres replied: “Smart. So you’re copying me?”

The High School Musical heartthrob admitted: “I am in fact.”

Ellen DeGeneres also told Zac that she also talked about his hair with his actress girlfriend Vanessa Hudgens during a recent taping.

Zac, furthermore, confessed that his windswept style was partially “derived from laziness.” Then Ellen surprisingly pulled out a clippers and asked: “Would you cut it? That would be a big deal if you had a brand-new, short haircut, because people then would want to do that.”

Zac Efron hesitantly asked: “Do you want to take a little off the back? It’s a little long actually.” However, Ellen quickly responded: “No, there’s no blade in it. It was just to scare you. It’s Halloween and I like to scare people.”