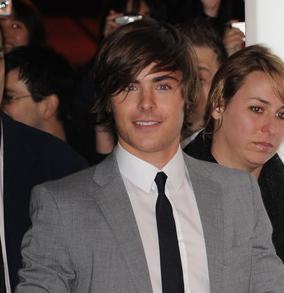 The “17 Again” star says his and “High School Musical” co-star girlfriend Vanessa Hudgens enjoy watching movies but avoid busy evening screenings so they can have some privacy.

He said: “That’s probably like, the best thing to do – we just don’t go on a Friday night or Saturday night. It’ll be like 9am on a Tuesday.”

Although the 21-year-old star enjoys hanging out with his girlfriend, he also confessed to a love of older women.

He said “Moms are always fun to hang out with at premieres. I figured out where it’s at… 40 is where it’s at.”

Zac is aware he gets a lot of female attention, but can’t understand why people complement his hair so much as he never does anything to style it.

He explained to US TV show ‘Extra’: “It’s really derived from laziness. It’s cool. I sleep on it, wake up and then walk outside. It would be funny if it took four hours to do. It doesn’t.”

Despite not taking care of his hair, Zac pays more attention to the rest of his body.

The actor reportedly splashes out on expensive emu oil treatments to remove scars and unsightly blemishes from his skin.

A source said: “Zac applies emu oil daily to a scar he got from his appendectomy. He can’t handle having imperfect abs and the oil, which is made from the bird’s fat is said to fade scars.”