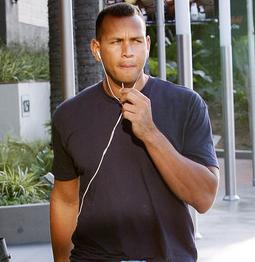 When asked if there is any romance between them at all, A-Rod replied: “We’re friends – that’s it.”

On the rumor that the pair has a romantic relationship and flying around the country in order to spend time together, A-Rod insisted: “I can tell you this. I have never been on a plane with her.”

When pressed on how much time they have spent together, and whether he had ever stayed the night at Madonna’s home, he laughed: “If I answered every rumor we’d be here for three weeks.”

A source, which is close to Rodriguez said that reports of his spending the night with Madonna are “completely, unequivocably false.”

Alex Rodriguez also revealed that his time was focused on running a baseball clinic for kids, saying: “When you’re among 200 kids and teaching the game of baseball it gives you an amazing feeling, just that you may inspire kids to reach their goals, whether it’s baseball or whatever their goals might be.”

He also shared with Madonna the desire to help children and one reason he has become a supporter of Madonna’s Raising Malawi charity as he explained: “I initially knew nothing about her charity.” But after being invited to one of Madonna’s fundraisers, he found that “we shared a lot of the same commitments toward helping children. I was very moved by the whole thing. I saw the documentary and it was very inspiring and informative. I saw an opportunity to help and I jumped at that.”

Rodriguez, who amicably settled his divorce with wife Cynthia, also denied the rumors that he and Cynthia had been arguing, adding: “I have a wonderful relationship with Cynthia. We try to be the best parents we can.”

On the amount of time he spends with his children, he said: “I see my children, honestly, seven days a week, which has been great. We both have a lot of respect for each other and she’s a great lady.”

On Madonna, he added: “I have a lot of respect for her. She’s very committed to making the world a better place. She’s had an amazing career, and we’re friends. That’s it.”