Hollywood’s most talked about couple has the town buzzing again over claims Angelina Jolie ‘flipped out’ after walking in on Brad Pitt with their nanny. 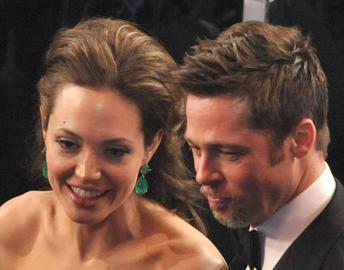 An American publication reports the actress caught Brad on the bed in the twins’ room rubbing the back of their female employee.

He is said to have been comforting her after she was taken ill.

But the sight was enough to throw Angelina into a jealous rage and she allegedly slapped her partner across the face and immediately fired the nanny, according to Star magazine.

A source is quoted as saying: “She got right in Brad’s face, screaming at the top of her lungs, and told the nanny to get out of her house and never come back. The argument woke up the sleeping twins, who began to cry.”

The source added: “As Brad tried to console both the twins and the nanny, Angie just snapped – and slapped! – hitting him right across the face.”

Brad, who stars in The Curious Case Of Benjamin Button, was reportedly left ‘stunned’ by the act and stormed out of the couple’s home and went for a four hour motorbike ride to calm down.

It’s alleged the argument took plays in the days after they appeared together at the Academy Awards in February.

The pair’s representative have so far not responded to the reports.

The couple, who fell in love filming Mr & Mrs Smith while Brad was still married to Jennifer Aniston, have been together for three years.