Touching up on her flying skills, Angelina Jolie ventured out with her bodyguard for flying lessons in Burbank, California on Thursday (July 9). 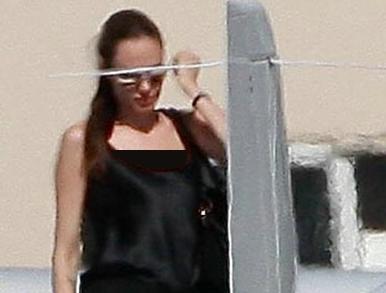 She was dressed in a black tank top that showed off the tattoos on her arm.

Hopping aboard a Cirrus SR-22 single engine airplane, the “Wanted” actress jetted off for the day’s flight before landing the plane with the help of her instructor awhile later.

Talking about the scene, an onlooker said: “She looked like she was just having so much fun. It even seems like she’s got a little muscle tone in her arms, like she’s been working out again.”

After taking a flying lessons and successfully landing, Angelina Jolie disembarks and jumps off the wing of her plane.

Angelina began taking flying lessons in 2004, in-between the end of her marriage to Billy Bob Thornton and beginning her romance with Brad. However, since the birth of daughter Shiloh in May 2006, her skills appear to have gotten a bit rusty from disuse.

The airplane outing comes just a few days after Miss Jolie popped out with daughters Zahara and Shiloh to sign them up for dance classes at a Los Angeles studio.