It sounds like the most nail-biting moment for Brad Pitt on Oscar night won’t be when his category is read out – at least, not if his reaction to the nominations is anything to go by. 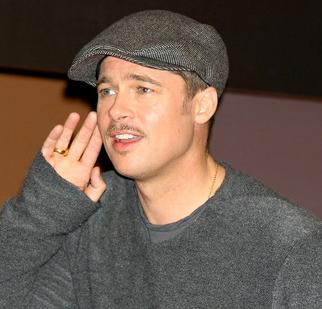 His co-star in The Curious Case of Benjamin Button, Taraji P. Henson, says that Brad and producer David Fincher were more excited about her getting her first Academy Award nomination than they were about their own.

As soon as they introduced the movies Brad and Fincher ran back to the hotel, and they ran in the room,” Taraji, who played Brad’s mother in the movie, told OK! at a party in New York hosted by Tuppeware.

“Brad sent me an e-mail saying, “Hey mama – job well done, you so deserve it.”

And Taraji said that she clicked with Brad significant other, Angelina Jolie, just as much as him – so much so that they’re hoping to work together.

“We’re talking about it. We’re bouncing around ideas. She’s busy for the next like year and a half. So, I’m just trying to get right behind that.”

“You put yourself out there in a film, you lay it on the line, and that’s what you believe your job is,” says Pitt, who earned a best actor nod for his role in The Curious Case of Benjamin Button.

“Then there’s this whole other entity you get sucked into, this publicity machine that you have to go and sell your wares,” adds the actor — who volunteered to shoot Angelina Jolie apparently breastfeeding in W magazine around the time Button hit theaters.

“It’s something I’ve never made my peace with,” Pitt, 45, continues. “I wrestle with it, and it’s out of control. Somehow you’re not supporting your film if you don’t get out and get on a show and talk about your personal life. I find it so…just such a bad feeling.”

Pitt and Jolie (up for best actress for Changeling) will have their first run-in with Jennifer Aniston, who’s presenting, and John Mayer at Sunday’s show.