On Friday, Cindy McCain admitted that she disagrees with Republican vice presidential candidate Sarah Palin on the issue of abortion rights. 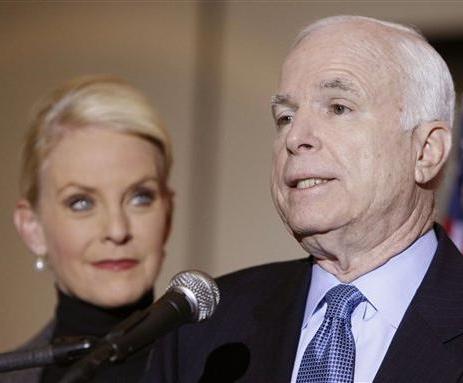 Unlike Sarah Palin, Cindy McCain said she believes victims of rape and incest should have abortion as an option.

Her husband John McCain stated on the show “The View”: “I believe Roe v. Wade was a very bad decision.”

As for other news, John McCain also stuck to his campaign’s charge that Barack Obama’s “lipstick” remark this week was a sexist slam against Sarah Palin, explaining: “He chooses his words very carefully, and he shouldn’t have said it.”

His statement was made after Barbara Walters explained McCain has used the same phrase when talking about Hillary Clinton’s health care policies and she tried to put Obama’s comment in context.

The Republican presidential candidate added: “This is a tough campaign.”

Speaking to an audience in Virginia, Senator Barack Obama had said, “You can put lipstick on a pig, it’s still a pig.” The McCain campaign has linked the remark to a line from Palin’s convention speech: “They say the difference between a hockey mom and a pit bull: lipstick.”

Barack Obama explained his side on Wednesday’s Late Show With David Letterman. The Democratic presidential hopeful said of the remark: “It’s a common expression — at least in Illinois. The expression connotes the idea that if you have a bad idea, in this case I was talking about John McCain’s economic plans, that just calling them change, calling it something different, doesn’t make it better, hence, lipstick on a pig is still a pig.”

Joy Behar asked how he could have approved the recent negative ads, saying: “We know that those two ads are untrue, that they are lies.”

John McCain simply replied: “Actually, they are not lies.”