David Beckham receives an instruction from Jesse Tyler Ferguson on how to stumble for a scene for an American show. 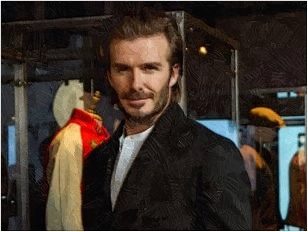 The soccer player stumbles after the “Modern Family” star told him, “[I’ll] watch [while] trip on the stair just like playing soccer. ” He is seen slipping while running up the stairs while Jesse can be heard laughing away in the background. Then David receives a sign of approval, “Pretty Good!” His composure returns when he poses for a family portrait with wife Victoria as well as Brooklyn, Romeo, Cruz, and daughter Harper.