David Beckham, who is married to former “Spice Girls” singer Victoria, has been wearing a mystical necklace to improve his love life. 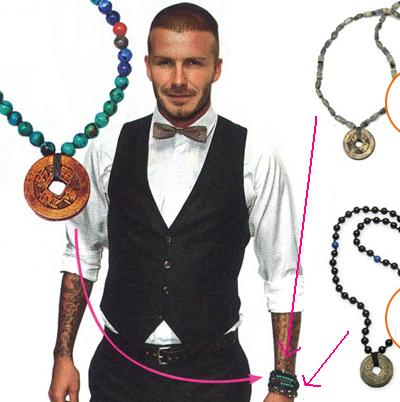 The necklace, which was made by Energy Muse, is made up of gems and crystals and includes a scroll promising the wearer better sex, health and work success.

A pal revealed: “David is a happy guy. The gems were bought as a bit of fun, but David and Victoria have certainly been smiling more recently.”

The pal added: “They have always had a strong sex life but are willing to try anything to keep things fresh.”

Stars including Courtney Love, Heidi Klum and Kristin Davis have all been seen with the spiritual accessory, which costs between £25 and £275.

A spokesman for the jeweller declared: “We couldn’t be more delighted.”

The spokesman also added: “The line has been popular with stars from Britney Spears to Courtney Love, but since David has been spotted with them, sales have shot up.”