Drew Barrymore, who was American icon and voting advocate, has posed for Harper’s Bazaar Magazine for its November 2008 cover. 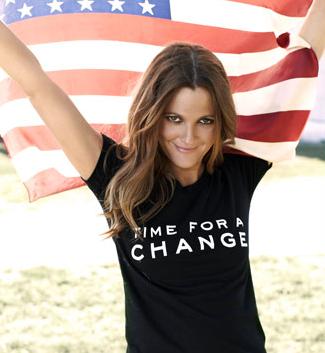 The actress has been in discussions with the Obama campaign about working on voter registration.

The actress describes Obama as a “uniter and an engager” as she explained: “What I want to do is work at the headquarters and do my part as a citizen.”

On how Obama made her cry, she shared: “For example, when I heard him speak about a gay person never having to sit outside the hospital room with their loved one sick inside, I burst into tears because so many people I care about are homosexual and it was profound to have someone be sensitive to that. That’s the kind of world I want to live in, where we’re not holding our own principles in judgment above someone or against someone.”

On her mixed feeling towards McCain, she revealed: “He is a good person and he does care, but he has voted against things that are shocking as far as people’s liberties and economic choices. I study everyone’s voting record because they say one thing and do another.”

On Republican vice president nominee Sarah Palin, she carefully said: “I think people realize the intention of the choice.”

On being a big fan of Hillary Clinton, she added: “It hurts me to see women so upset that she didn’t get in. Not voting because you’re angry? That won’t work.”

The actress admits she didn’t really pay attention to the voting process as she explained: “I was raised in a family — well, no family, really, so no one talked to me about politics or why voting is important. So my way to educate myself was driving around America and filming all sorts of people with different mind-sets. I became an avowed voter and feel it is really important to engage other people in it.”

Drew Barrymore, who split from Justin Long earlier this year, admitted that her priorities have changed so much since turning 30, adding: I’ve been single for months now, and I’ve turned my attention towards my passions, my friends and the causes I believe in. I’ve learned to put myself second. I’ve had a couple of fun, frolicky relationships, but really, I got out of five-year-relationship and dated a few people here and there,” she says. “Mostly it’s been about learning who I am, not through a man, but for myself.”

She also revealed: “I’ve been spending more time with my friends and doing more traveling with the U.N.” — she’s been to Kenya twice — “and challenging myself with work. I’m so happy with where my priorities are right now.”