Emma Watson showed off her fashion credentials in a daring dress last night. 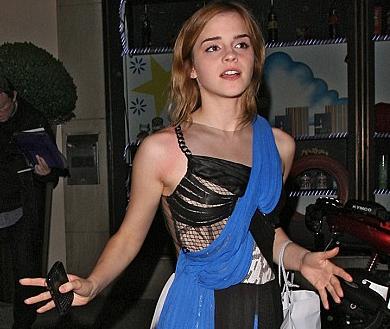 The Harry Potter actress wore a blue and black dress, with fishnet panels over her breast, as she attended a private party at Harvey Nichols.

She was having a night off from the hectic filming schedule for Harry Potter And The Deathly Hallows, the final film in the series.

In contrast to her character Hermione’s wholesome look, the 19-year-old has been busy establishing herself as a fashionista – with a front row seat at London fashion week.

Last year, Paris-born Emma signed up with leading model agency Storm, which has supermodels Kate Moss and Lily Cole on its books.

This month she appeared in a photoshoot by Chanel designer Karl Lagerfeld for French fashion magazine Crash – following a shoot for Italian Vogue last year.

And she will soon be featuring in a campaign for Burberry – having signed a six-figure deal earlier this year.

Emma, who is set to start university in America in September, has amassed a £10 million fortune – and become Hollywood’s highest paid actress under 21 – since landing the role of Hermione when she was nine.