Hayden Panettiere is a cover girl for Glamour magazine for its July 2008 issue. 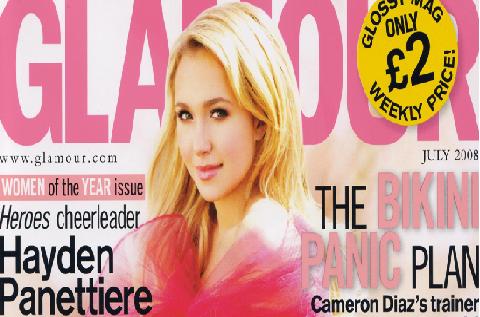 In the Glamour magazine issue, the stunning “Heroes” cheerleader talked about boys and Britney. She revealed, “I used to walk my dogs in my pyjamas and I couldn’t have cared less but you become paranoid and get worried that you don’t look OK.”

The “Heroes” star, who once had a lesbian experience, admitted to “experimenting” with her female friends when she was growing up.

The 18-year-old star said, “It’s great to be single. It’s great to have boyfriends. Or girlfriends.
There are occasions when you kiss your best friend growing up, having fun and goofing about. Like perfecting your technique.”

Hayden Panettiere, who was rumored to be dating her “Heroes” co-star Milo Ventimiglia, refused to talk about her love life.

She continued, “People are more interested in who celebrities are dating than the events going in the world. I’m not shallow. And I’m not sharing.”

The actress also revealed she doesn’t care about paparazzi attention, and prefers to concentrate on her career.

She added, “I think there are some people who like that sort of attention more than others. I used to walk my dogs in my pajamas and couldn’t have cared less, but you become paranoid and you get worried.”