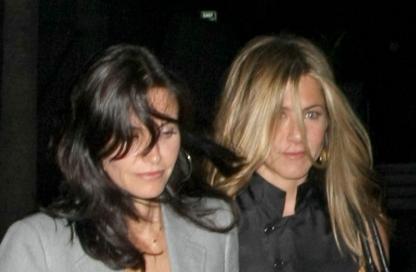 The longtime BFFs enjoyed a dinner with Cox’s husband David Arquette at L.A.’s Water Grill before heading over to Staples Center to catch a Fleetwood Mac concert.

An onlooker revealed: “They totally looked like they did back on Friends – two women having a girls night out. Other diners at the restaurant were definitely looking at the pair, but it didn’t seem to bother them. They were both in a great mood! They were even holding hands on the way out of the restaurant!”

Surely, the two had a lot of catching up to do (Aniston has been in NYC shooting the comedy The Baster; Cox has been filming her ABC show Cougar Town).

Meanwhile, Friends BFF Jennifer Aniston and Courteney Cox (with husband David Arquette) were spotted as they leave the Staples Center together after watching a Fleetwood Mac concert in Los Angeles on Thursday (May 28).