Jennifer Hudson has offered her forgiveness to the killer who murdered her mother, brother and nephew last year. 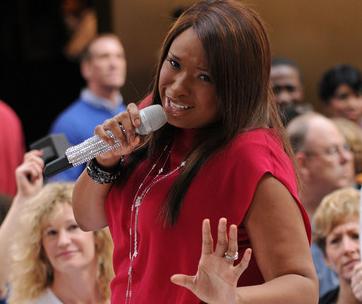 The Oscar winner’s mother, Darnell Donerson, and brother, Jason, were found shot dead at their home in Chicago, Illinois on 24 October. The body of her seven-year-old nephew, Julian King – son of sister Julia – was found in an abandoned car three days later.

Hudson bounced back from the tragedy in February, returning to the limelight just three months after the slayings. She’s continued her triumphant return after kicking off her tour with singer Robin Thicke in March.

And the 27-year-old has called on a higher power as she continues to mourn her loss, insisting she’s managed to cope by offering forgiveness to the person who killed her beloved family members.

She says, “It’s my faith that gets me through, and where I come from, so I’ve got to give glory to God. I’m a very forgiving person, and once again I serve the mighty God, who is all about forgiveness. And if I can’t forgive, then how can I expect him to forgive me?”

William Balfour, the estranged husband of Hudson’s sister Julia, has pleaded not guilty to charges of first degree murder and home invasion. He is due to stand trial at a later date.

Meanwhile, Jennifer Hudson performs on NBC’s “Today” at Rockefeller Center on May 15, 2009 in New York City.