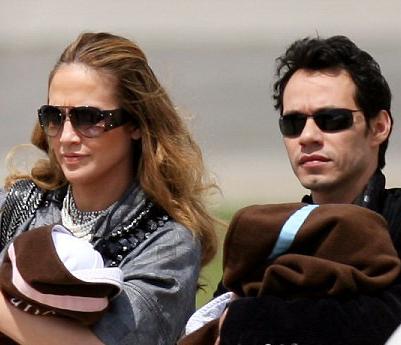 The 39-year-old stunning singer was spotted as she pumped her arms in the air and smiled broadly after crossing the finish line of the swimming-running-biking event.

The singer thanked the crowd, saying: “Thank you guys so much. This is an amazing day.”

She also revealed: “I feel really great and so glad I finished and that I made it out of the water but more amazing than that, I feel really great that we raised $127,000 for the Children’s Hospital [of Los Angeles] and hopefully it’ll go to good use.”

Her husband Marc Anthony was on the sidelines being supportive. The celebrity couple was seen kissing between the biking and running portions of the race.

After finishing the exhilarating race, Jennifer Lopez joined her family and Matthew McConaughey, who came in before her, in the VIP area. Matthew McConaughey was accompanied by his girlfriend Camila Alves and their newborn son Levi.

Jennifer Lopez and Marc Anthony are expected to return to NYC after the event to host his 40th birthday bash Sunday night.

What inspires her to run a triathlon? Jennifer Lopez was inspired when she was watching television during the time that she was still pregnant with twins Max and Emme, who were born in February.

The actress explained last month: “I was beached like a whale. I was watching TV, and I saw a triathlon and I said, ‘You know what? I think I could do that, that would be great for me to do. Maybe I’ll do it this year.'”

The source revealed: “She wants to make it a Cuban casino-themed party. It will be like a casino from the ’60s, with everyone gambling.”

Perhaps she is going to pull off the party hop of the lifetime since she already finished the Malibu Triathlon Sunday as the source added: “She’s wonder woman.”