Jessica Alba, who previously posed in a bondage, silences herself again as she posed for the second ad for the “Declare Yourself” campaign. 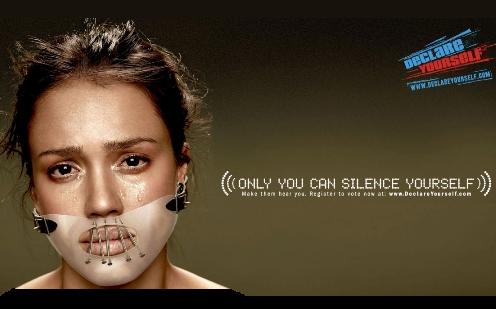 The “Fantastic Four” star was wearing only a Hannibal Lecter-type mask called “The Muzzler.” The advertisement urges potential voters to register for the November 4 presidential election.

The campaign is aimed at energizing young adults to participate in the 2008 election. Other celebrities who posed for the advertisements are La Toya, Christina Aguilera, Jonathan Bennett, Andre 3000, Fish Hooks, etc.

Zach Quinto revealed: “I’m also here to support that our country needs to wake up and take responsibility for where it’s headed and vote for Barack Obama.”

Adrienne Bailon declared: “Cheetah Girls are all about empowerment and it’s so important to get out there and vote. I am registered to vote.”

Jessica Alba and her husband Cash Warren took their four-month-old daughter Honor Marie to the Democratic Convention in Denver, Colorado.