Jessica Alba will be the protagonist for the Club Campari themed 2009 Campari Calendar. 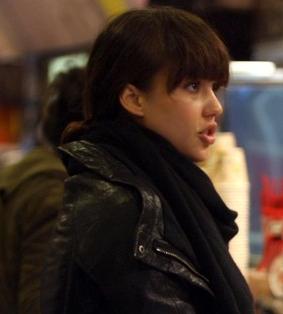 The “Fantastic Four” actress will be photographed by Mario Testino and directed by Jean Paul-Goude.

This year is the 10th anniversary of the Campari Calendar, and as part of the celebrations a special invitation-only event will take place on December 2 in Milan, where Jessica Alba will walk the red carpet along with other celebrities.

The 27-year-old actress is a frequent name on “Hot 100” section of Maxim. She was voted AskMen website as number one on their list of “99 Most Desirable Women” in 2006 and “Sexiest Woman in the World” by FHM in 2007. She also appeared on the March 2006 cover of Playboy.

Jessica Alba was married to Cash Warren and had given birth to their first child – a daughter named Honor Marie Warren born June 7, 2008.

The actress has signed up for Michael Winterbottom’s “The Killer Inside Me” an adaptation of a novel from noir author Jim Thompson, with co-star Casey Affleck. She is currently filming in NYC for Marilyn Agrelo’s An Invisible Sign of My Own due for release in 2009.

Eva Mendes featured on the 2008 Campari calendar themed fairyland and was photographed by Marino Parisotto. Salma Hayek was the star of 2007 calendar.

The Campari Calendar is rapidly becoming one of the world’s iconic artistic calendars. Distributed in international limited edition of only 9.999 copies it is a small, collectible luxury for the happy few that receive it, and is a tribute to the beautiful women and world class photographers that make it come to life every year.

Gruppo Campari is a renowned Italian alcohol beverage company with 40 brands under its belt.