Jonas Brothers admitted that they were inspired by the Beatles when penning new material and even calling the British band as their “idols.” 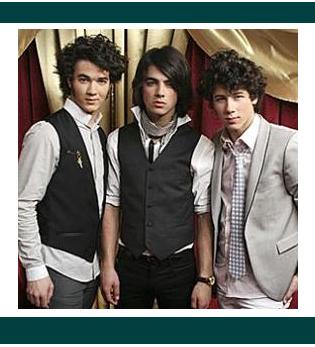 The Disney star that they look up to the Fab Four for inspiration in the music industry but the sibling trio insisted that they do not compare themselves to the famous group.

The brothers wrote on their website, “It is an honor BUT we definitely DO NOT compare ourselves to the Beatles. We look to them as a source of inspiration but we don’t think anyone will have the impact that the Beatles have had on music.”

Meanwhile, Jonas Brothers insisted they are “just like everyone else” when it comes to looking for love. They admit they don’t have enough privacy to get to know girls.

The sibling trio, who wear purity rings to signify their no-sex-before-marriage rule, find it hard to devote themselves to relationships – and blame their fame for hindering their love lives.

In a question and answer session on their website, they revealed: “We are just like everyone else when it comes to love and attraction. When we meet a girl we are interested in we try to get to know her and look for ways to make that happen. The hard part is finding a place where we can have privacy to get to know someone.”

Youngest brother Nick has been linked to Disney stars Miley Cyrus and Selena Gomez, while 19-year-old Joe has been connected to country star Taylor Swift.

And the brothers have not rule out dating a fellow celebrity again, adding: “A lot of the celebrities we have met are normal people too. It really depends on the person. You can have drama with anyone if they are prone to drama.”